A Funny Thing Happened on the Way to the Forum - A Tourist in Rome (& Florence)!

I grew up in Monterey, CA, a well known (and well deserved) tourist destination. As a teenager I could spot the tourists a mile away: in the summer, they were the ones wearing shorts and T-shirts. They didn't realize that Monterey in the summer (used to be) like Mark Twain's famous lament about San Francisco: "The coldest winter I ever spent was a summer in San Francisco."

I have traveled around Europe and Asia in my life but always on my own and rarely with any distinct agenda, nor yet a tour book, relying instead on whim and fancy and the fates. Until this trip to Italy in October I had never played the official role of tourist. And, you know something, it was fun and very helpful. Our little group (just under twenty) were guided around Rome and Florence by official tour guides who wore a little microphone and hung a sending unit around their neck while each of us wore a receiver with an ear "bud." Thus we could walk the noisy, crowded streets of Rome, or enter a hushed church or museum and the guide could talk softly or normally and each of us could hear the guide just fine--even if we were standing some 20 or 40 feet away, separated by another tourist group using the same technology!

Our guide in Rome is both a professional tour guide AND a member of Ananda Assisi. She was energetic, thoughtful, articulate with just the perfect charming Roman accent, and very knowledgeable, replete with lots of fascinating historical anecdotes. She was also a Roman by birth and clearly viewed her heritage with a quiet air of dignified national pride. Our guide in Florence was a born entertainer and also very informative and personable.

Though I have been to both places before, I found this experience very enjoyable and, at my age, being herded about town as a marked tourist, was no longer a threat to my fragile self-sufficient image! In fact, I recommend it. Given that I would never bother to read tour guide books anyway, even if I did, I can't imagine walking around these places with my book in hand trying to correlate the object I am looking at with its description in a book!

We stayed at a convent quite near the Vatican. It was large, clean, beautiful, quiet and there was even Wi-Fi! It was perfect for our needs. Our group would meditate together in the morning in a special room provided for us before having breakfast and getting in our vans to go "touring." Weather was warm (sometimes hot) but essentially perfectly enjoyable. Our first stop was Santa Maria della Vittoria, an eye-popping baroque and beautiful church near the Termini Train station that houses a marble statue by Bernini of the angel piercing the heart of St. Teresa of Avila. It is exquisite. It was a last minute suggestion from one of our members here in Seattle and well worth it. We had a scheduled stop, also, at Santa Maria Sopra Minerva where the body (but not the head) of St. Catherine of Siena lies in state. We couldn't really meditate at either but we could pray and be still for a short time. It was worth it.

We also did the requisite tour of the ruins of the emperors' palaces and a sidelong glance at the imposing Colosseum, though the latter was overshadowed by the attraction of a delicious pizza lunch across the street. We also had a driving tour of various (ancient) hot spots along and around the Tiber River. A walking tour past the ruins of the forum(s), the Arch of Constantine and a stop at the incredible Pantheon/church.

The next half-day was St. Peter's, the Sistine Chapel and the Vatican Museum. All were sardine packed and trying to look straight up at the ceiling of the Sistine has its downside (on your neck, principally). But to say it isn't impressive you'd have to be a zombie. St. Peter's starts off with the side niche containing the heart opening, soul-inspiring Pieta by Michaelangelo. Words simply cannot convey the visceral impact of this inspired work of art. Michaelangelo was only 22 years old when he sculpted it from Carrara marble he personally selected from the mountains. I feel inadequate to offer anything more than inserting the photo image below. Much has been written--historical, artistic and religious--about this almost unbelievable creation which is so alive, so fraught with multiple levels of feeling, both sublime and heart wrenching. 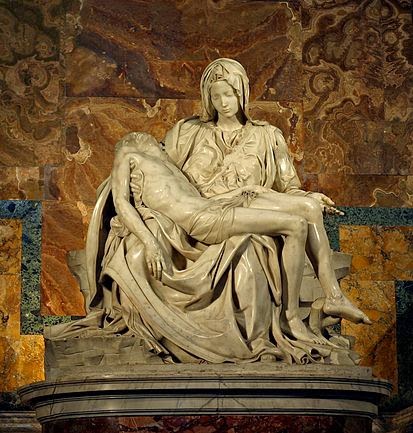 There's little point saying much about St. Peter's itself. Yes, it's impressive, and I mean that sincerely. The power, the wealth, the inspiration, the world-view that could have enabled the creation of such architecture and such works of art that are housed in the Vatican--it simply staggers the mind and dwarfs the pedestrian and merely functional creation of the latest smart phone.

That afternoon we boarded a modern, sleek fast train to Florence and a few hours later found ourselves ensconced in the heart of Florence in yet another convent: not quite as nice but very serviceable and where we also had our own meditation room!

I asked myself: what will become of these great buildings and art works in a few hundred years? A thousand years? All of the architectural treasures here bring in millions of tourist dollars and create a world-wide magnet. But can the objects themselves last "forever?" Do not the millennials find such things a bore? If not now, what about the next generation, or, five generations from now? Will these be abandoned in the future like the great cities of ancient times? Perhaps. One thing you can be certain of is this: they will be digitized. Long after they have crumbled due to indifference, shrinking national budgets, earthquakes or floods, plagues or wars, they will exist in the virtual reality of Digital City. Someday you will virtually walk the narrow cobblestone streets of Florence, or peruse the Uffici museum, gaze at the marble David and gawk at the ceiling of the Sistine Chapel.....from your home.

I enjoyed the monastery of San Marco: the monk cells with the frescoes by Fra Angelico. The history of the Florentine ruling families (e.g. the famous Medici family) and their endless intriques in medieval and very unstable Italy. The Uffici is simply an overwhelming collection of art: no one should have to view that much art in less than 2 hours. All in all, well worth the visit.

I had excellent meditations in the monasteries we stayed at both in Rome and in Florence. Our group coalesced quickly and harmoniously. The food we had at the hand (mouth?)-selected restaurants made us feel like royalty....about to pop!


Posted by Nayaswami Hriman at 11:01 PM No comments: