St. Francis - Ahead of His Time, and Still Here!

Wednesday, October 8, we arrived by train from Florence to Bastia, one train stop short of the town of Assisi, Italy. Rented vans took us "up the hill:" around the outer periphery of the charming and beautiful town of Assisi, and out the "north gate" at the top of the town. The road, SS 444, winds its way up the hills that coalesce into a mountain, around and behind Mt. Subasio upon whose western flank the town of Assisi clings.

The terrain is eerily reminiscent of the Sierra Nevada foothills around Nevada City/Grass Valley, CA where the first Ananda community was established. Night was falling as we climbed higher and higher up the mountain. At the top, the road levels off, though still curving around, before descending the other side into another valley. Along the ridge, then, sits Ananda Assisi: a retreat center and intentional community, with affiliated businesses (both community and personal) and private homes strung along SS444 in both directions.

The central feature and gathering place for Ananda Assisi is the former hotel building, Il Refugio. Here guest registration takes place; a book and gift store exists, guest rooms on several floors, an outdoor cafe and gazebo, ancillary administration bungalows, and the main feature, though hidden from the road, is the Temple of Light where meditations and classes are held.

We arrived for a late dinner which is taken in silence until about half way through. Announcements are made in Italian, with some concessions made for groups our size for English speakers, and other languages (Russian and German, esp.) as required. Peruse, if you like, www.Ananda.it.

After dinner, our vans took us further along the road (what, less than one mile?), to our accommodations: a rented facility called Il Ritero ("the retreat"). On both sides of the main two story rock building, are strip-like hotel bungalows (four or five simple units in one "strip"). These housed most of us. They are clean and simple. Bathrooms there are curious: when you shower it wets the entire bathroom, toilet, bidet, sink, your stuff.....everything! Not sure why this cultural nuance, but it seems pervasive and tenacious, all reason and convenience aside.

Padma and I were housed in a lovely little duplex a few hundred yards from the main center and across the street. Two or three others were even closer in a large 3-story building named "Brindaban" (the name of the town in India where Krishna lived).

The next morning, Thursday, a weekly 3-hour meditation took place (and every week) beginning at 6 a.m. It's followed by breakfast in silence. Bread, toast, fruit, oatmeal, butter, peanut butter, and jam, with tea and coffee and milk, comprise the typical fare. We got pancakes that morning, as I recall, in addition!

The rolling hills of Umbria alternate forested areas with areas of cultivation and pasture. In the Fall, hunters emerge from towns in the region to hunt. Thing is, they bring their own birds in cages; let them loose, and then, in manly fashion, shoot them. Retrieved by their ever faithful hounds, they, no doubt, return home proudly displaying their courage and skills.

With or without seasonal hunters, the hills are alive with beauty and serenity. There can be no doubt that St. Francis and his band of brothers walked these hills chanting God's name. There is no doubt that this land is blessed by the descent of grace into human form. It lingers in the soft breezes, in the warm sunshine, in the flashes of lightening and the crashing of  thunder, in the powder blue and happy yellow flowers that spring up on their own all around, and in the deep silence of the still night air.

In May, red poppies appear and populate fields throughout the region. Quaint farmhouses dot the hills, with pretty little gardens and stately trees in attendance. Broad panoramas of hills and distant mountains leap out at you as you round a turn in the country road that hugs the hillsides lovingly.

Our first outing was to the giant Basilica of St. Francis which dominates the western end of the small town. A sharp contrast to Francis' simplicity and lifestyle, it nonetheless is a focal point of devotion for millions.

Three stories beneath its frescoed ceiling is Francis' tomb, and that of several of his closest brothers. It's been called into question whether his body is there, but I find that kind of doubting unhelpful. If for no other reason than the devotion of millions, I found meditating there in the pews very peaceful and uplifting.

We had an official tour given by a Franciscan priest from New Jersey. We used the headsets that tourists and their guides use. His humor was extremely irreverent but even he could not obfuscate the spiritual vibration of the relics, art, and sanctity of the place. It was interesting that he wove his theology into his patter but used phrases like "making good decisions" in life (ergo, going to heaven) and "finding happiness!"

By pre-arrangement, he took us outside the public areas and into the rooms of St. Joseph of Cupertino. Joseph was a simple, humble and, I believe, all but illiterate priest who lived about a century after Francis. His story is quite remarkable and his claim to fame is the fact that he often was seen, publicly and by crowds, to levitate in ecstasy while attempting to "say" Mass. But with our intellectual tour guide, our stay there was rather limited. We sang a song together and had a few moments of silence. [Many years ago, Padma and I were able to go into those rooms with Shivani Lucki and meditate there on our own for a much longer period of time. A few days later, our pilgrims traveled by van to Joseph's home town where his incorrupt body remains on display.]

On our way up the hill back to our vans, we stopped at a very sweet, pleasant, shaded and wholly genuine outdoor cafe for capucchino. Then back to the Ananda Center for lunch and a tour of Ananda. The tour took us to the Inner Life offices and warehouse a few kilometers past the center and down the mountain in a tiny village; to the offices of the publishing house for our books in Italian, to the art gallery and workshop for several resident artists, to a member-owned organic farm (just like ours on Camano Island), and more. As much as I am tempted to speak of the Ananda community and center there and their years of dedication and the growth of it against all odds, I think I'll stick to my subject (yes, for a change!).

That evening after dinner, we were treated to a concert of music by their choir and some musicians. Many key resident members were away at the time of our visit, being just after the intensely busy summer retreat season, but they rousted enough voices to charm and inspire us. Music, like Italian cuisine, art, and countryside, has a mellifluous, light and harmonious quality that is its very own. I liken it to what happens when you buy the excellent Italian coffee and bring it home to America. It's good, but can never quite taste as good as it does in Italy. So, too, the songs they sang were familiar to us all (composed by Ananda's founder, Swami Kriyananda) and our choral groups do a wonderful job here, too, but somehow........it's not the same.....

The next day we went back to the town of Assisi to the convent of St. (Sister) Clare, called San Damiano. In St. Francis' time, it was a run down church where he prayed and where the crucifix came alive and Jesus spoke to Francis saying, "Rebuild my church!" (Now that same crucifix is to be seen in the town of Assisi at the church there dedicated to St. Claire, called, surprisingly, Santa Chiara!)

I may be speculating here but to me, and I'm sure to others, Claire was to Francis as Teresa (of Avila) was to John of the Cross: each a reflector to the other in a relationship as pure and as inspired as any such could ever be. The poignant and touching story of Clare, a beautiful teenage girl born of a prominent and wealthy family in Assisi (like Francis himself), being inspired by Francis' conversion and total dedication to Lady Poverty and his guru, Jesus Christ, secretly leaves her life of luxury and pleasure to follow Francis. They were obviously, in a sense, "spoiled rich kids" of the town and of course knew each other. Francis, formerly, the party guy in the town, was naturally well liked and well known. But, as is true in the life of many saints, both east and west, these two souls, born by past spiritual karma into position and opportunity, were but disguised saints whose "coming out" had to wait for the right moment.

The famous scene where Francis, surrounded by the very few brothers who had at that early stage come to follow him (also, upper class "boys" like himself), cuts Clare's beautiful hair in a symbolic but very real act of renunciation that is like no other. Artists down through the centuries have been inspired to depict this life-changing and archetypal event which touches us on a deep level. Her sanctity and her spiritualized love for St. Francis is one of the all time greatest stories ever told. Francis rarely permitted himself to express his feelings to her outwardly but there is no doubt of their mutual feeling, depth and purity. (I'm not here to tell their story, so I must move on).

But I say this because the spiritual power of the old convent and its utterly stark and intense simplicity, expressive of the seemingly harsh life the sisters lived there, is like pure light and crystal clear water, untainted by anything merely mortal or mundane, even if all that is tangibly left speaks of their life of material lack. The vibration of God, unseen but powerfully felt, pulses from the very stones.

Another spiritual power spot is the Porciuncula, the second little chapel that Francis and friends helped restore. As is well known, a large Basilica was built over the top of it and while not commenting on the incongruity of it all, it does protect the chapel from the weather. It's hard to get a seat in the "toy" chapel but it is well worth whatever wait is required. Swami Kriyananda, Ananda's founder, praying there many years ago, felt intense sweetness. In prayer he asked St. Francis, "How is such sweetness possible?" The answer he received was "by never judging." Whew! It is also the place where Francis died and a place where many events of his life took place. It, too, is not to be missed. And after an hour or two of prayer and upliftment, you can reward your efforts and share a gelato across the street with St. Francis looking over your shoulder -- sweetly.

Well, let's take a break, shall we? We'll return to Ananda and to Assisi in our next installment.

The blessings continue and the main reason I write these is so I can "go back!" 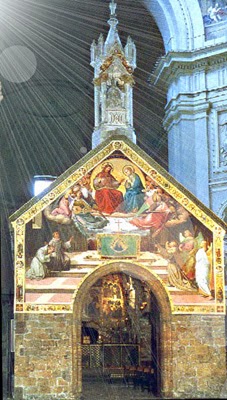 Posted by Nayaswami Hriman at 8:52 PM No comments: