Our Visit to the Shrines of Paramhansa Yogananda in Los Angeles!

Last week a group of Ananda members from Seattle flew to southern California to tour the places where Paramhansa Yogananda lived and taught and where, also, our founder, Swami Kriyananda came to live during the last three plus years of Yogananda's life and for another eight or nine years after that. 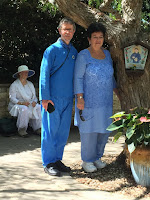 Our trip began in Encinitas where Yogananda wrote (most of) his now famous life story, “Autobiography of a Yogi.” Here, on a bluff overlooking the Pacific Ocean, are beautiful meditation gardens, the Hermitage itself, and staff and guest quarters. This was the location of Yogananda’s experiment with what he called a “world brotherhood colony:” where people of all walks of life, races, religions, monastic or householder would learn to live and work together. In his time, he grew vegetables and fruits and had a vegetarian café along the Pacific Coast Highway.

We meditated and enjoyed the vibrations of the residue of the many hours of samadhi enjoyed by Master and his most advanced disciple, Rajarshi Janakananda.

We also swam at “Swami’s beach” (the actual name of the state park/beach below the bluffs; so named by the surfers, residents, and fishermen of Encinitas for whom a great love for Master was felt) and ate at the nearby (and now privately owned) Swami’s café.

In Encinitas we chanted and meditated at the local Ananda center on the property of Casey Hughes. Casey, who has traveled to India some forty times so far this life, had designed and constructed a lovely outdoor meditation shrine which he had commissioned and constructed in Bali. It was then disassembled and packed into a shipping container and sent to Encinitas where it was reconstructed.

In honor of the pilgrimages led by Swami Kriyananda (years ago) that included a visit to Disneyland, we spent a day there, too. Imagine 30+ adults with no children roaming around Disneyland muttering, “Gee, it IS a small world after all!” 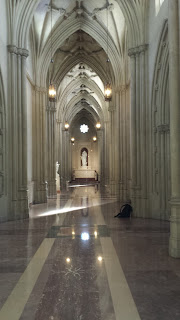 We proceeded to the famous Forest Lawn cemetery in Glendale where the body of Yogananda is interred. This is a popular sacred spot for thousands of pilgrims from around the world. Meditating and chanting in the great halls of Forest Lawn where the Master’s body lies is a special experience. (There are also many famous Hollywood celebrities interred there.)

One may easily discover that although Yogananda’s spirit may be omnipresent, his human remains continue to pulse an undying beacon of superconsciousness calling us, too, home to eternal bliss.

Next we visited the SRF Hollywood Temple on Sunset Boulevard. This is where Swamiji met Yogananda on September 12, 1948 and was accepted as his disciple. At various times both Yogananda and Swamiji gave Sunday Services, classes and meditations in the simple but elegant chapel. There one sees two pulpits: one for the resident minister and another for a visiting minister. He called it the “Church of All Religions.” The grounds are lovely beyond imagination: simple yet astral in beauty. We chanted and meditated in the chapel and were hosted by Brother Pranavananda.

Our next stop was Yogananda’s headquarters atop Mt. Washington: a short distance from downtown LA. As a young monk in India it was this building (and the Encinitas hermitage and the school at Ranchi) that he saw repeatedly in visions. We were escorted up three flights of stairs to the apartments of the Master. Words cannot describe the powerful vibrations of utter stillness. It is like walking into the “Vacuum of Eternity,” another world saturated with stillness and divinity hushed but latently infinite.

On the first floor of Mt. Washington, we meditated in the chapel where Yogananda gave kriya initiations, classes, and led meditations. Here too the residue of cosmic consciousness lingers like a “worm hole” into eternity. (One cannot adequately describe the blessing of sacred places where divinity has appeared. It’s not a matter of religion or belief, but experience. Nor is it confined to any one culture or time.)

Outside in the Temple of Leaves we sat and meditated where Yogananda sometimes gave outdoor classes and where Swamiji and the monks would meditate together. Many of our pilgrims reported their deepest experience here, sitting there under the lovely pepper tree.

We stayed three nights at the Biltmore Hotel, a structure of such phenomenal artistry and beauty that it stands alone like a time capsule to the days when Yogananda first came to Los Angeles and lived in the Biltmore (before Mt. Washington was purchased). It was here in what is now the lobby of the hotel that he left his body on March 7, 1952. (The occasion was a banquet in honor of the newly appointed ambassador to the United States from India.) Reading (as he once predicted in contemplating the end of his life) his poem, "My India," he dropped gently to the floor, leaving his body, as he said he would, by stopping his heart at the appointed time that he was summoned “home” by God.

While the former banquet hall is now the lobby, the staff at the Biltmore are familiar with the story and the fact that people come year round (but especially in March), to sit calmly with eyes closed near the beautiful Italian artwork before which Yogananda spoke. (You can see parts of the wall piece in the well known picture of Yogananda which is called “The Last Smile.”)

We were guided and ably assisted by the Ananda Center in LA leaders, Narayan and Dharmadevi Romano. They befriended everyone and charmed us with their sweet and focused presence.

On Saturday we visited the famous Lake Shrine which sits in a hillside bowl on a tight curve near where Sunset Boulevard ends at the Pacific Coast Highway. This incredibly beautiful property has as its visual centerpiece a small lake. On it is a houseboat used for meditation and a reconstructed Dutch windmill used as a chapel. The most beautiful grounds and hillsides surround the lake. Ashes of Mahatma Gandhi lie in a sarcophagus (the only ones outside India) and special shrine by the lake. Much more could be said. Thousands come here: some as devotees, some as neighbors, many, attracted like bees to the nectar of peace in a peaceless world.

We were welcomed warmly with the divine smile of Brother Achalananda, once a brother and junior monk to Swami Kriyananda (who as the head monk at the time, accepted Achalananda into the monastery sometime after Yogananda's passing). In two segments (because we couldn't all fit), he chanted and meditated with our group in the houseboat.

Later, he regaled us with stories at the Lake Shrine temple (built high above the lake) and also commented with kindness and understanding in regards to Swami Kriyananda. It was a special moment for those who were there.

Those of us who were blessed to travel together to these holy places share an unforgettable memory and grace which is ours to meditate upon, nurture, and share.


May the blessings we have received radiate outward in waves of peace!